MARCH 11, 2013 EARTHQUAKE LATEST NBC NEWS – Palm Springs, California – Scientists led by Dr. Whitney Behr from the UNIVERSITY OF TEXAS, AUSTIN, got quite a shock when visiting the SAN ANDREAS FAULT at White Water Canyon Earth & Biological Sciences, as the Earth trembled with violent shaking! “I was very concerned,” said Marcus Hughes, executive Director of WWCEBS. “When they hiked into The San Andreas Fault between the two massive continental tectonic plates – North American & Pacific – with rocks slides all around them, I was very worried the Earth may have opened up and swallowed them alive!”

Earth’s continents are always on the move. This continental drift, part of the theory of plate tectonics, is so fundamental to geology that it’s easy to forget that the concept was a fringe theory just a few decades ago. It’s only recently that a majority of geologists accepted the idea that Earth’s crust consists of plates that move in relation to one another and that this motion can explain earthquakes, volcanic eruptions and the formation of mountain ranges – some of the most important phenomena in geology…

The San Andreas Fault is known throughout the world as an integral part of the constantly moving tectonic plates of our Earth’s crust above its Mantle, which were once joined together as one Supercontinent named Pangea!

Pangea was a supercontinent that existed during the late Paleozoic and early Mesozoic eras, forming about 300 million years ago and beginning to rift around 200 million years ago, before the component continents were separated into their current configurations. The single global ocean which surrounded Pangea is named Panthalassa. 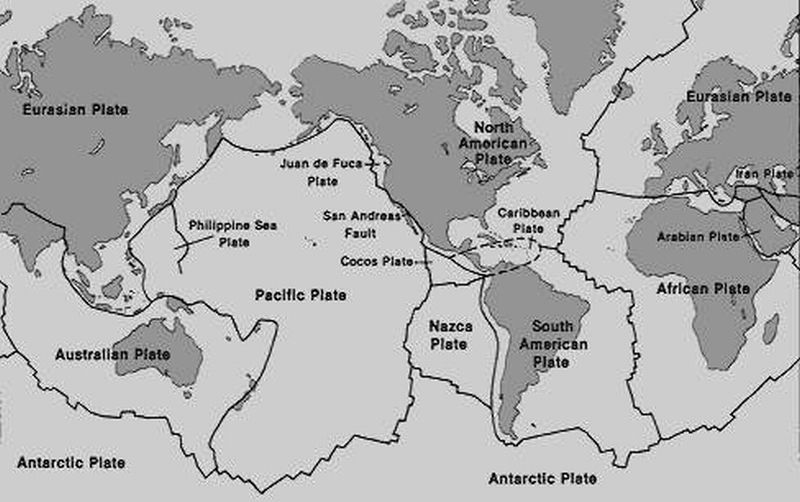 Earth cutaway from core to exosphere. Left picture is not to scale.

The interior structure of the Earth is layered in spherical shells, like an onion. These layers can be defined by either their chemical or their rheological properties. The Earth has an outer silicate solid crust, a highly viscous mantle, a liquid outer core that is much less viscous than the mantle, and a solid inner core. Scientific understanding of Earth’s internal structure is based on observations of topography and bathymetry, observations of rock in outcrop, samples brought to the surface from greater depths by volcanic activity, analysis of the seismic waves that pass through the Earth, measurements of the gravity field of the Earth, and experiments with crystalline solids at pressures and temperatures characteristic of the Earth’s deep interior

The proposed programs and activities will be primarily field studies focusing on the biodiversity and geology surrounding the San Andreas Fault and the Whitewater River. The field/scientific studies will also encompass the study of birds, mammals, fish, insects, reptiles, amphibians and vegetation within adjacent areas to the tectonic plates – North American & Pacific

Each field study will be conducted and led by experts within each scientific discipline.

With the installation of Global Positioning Satellite (GPS) recording stations and Seismometers, both in Whitewater, Southern California, and Fukushima, Japan – we will monitor in ‘real time’ via satellite up-links the actual movement of the Pacific Tectonic Plate on the east and west sides, as well as monitoring associated climatic conditions of the Earth together with rising sea levels, and the potential for Earthquakes and Tsunamis.

Application of Seismometers in the Measurement of Earthquakes

What is an Earthquake?

Earthquake activity is unpredictable and can have a devastating impact on the countries affected. The Earth’s surface is made up of continental tectonic plates. These plates move in a horizontal and vertical pattern. A break along a fault in the plate boundaries under the Earth’s surface forces the two tectonic plates to rub together. Friction generated by this contact releases a burst of energy causing a seismic wave that manifest as an earthquake.

The earthquake will start at the hypocenter (the region below the Earth’s crust) and escalate to the surface of the Earth called the epicenter (Figure 1). The plate boundaries become trapped at a fault and so the energy that would normally be used to move apart the two tectonic plates ripples out from the fault towards the epicenter when there is a sudden shift in these plates, hence why we experience the earthquake.

Figure 1. Basic principle to earthquake formation. The earthquake rupture will occur at the hypocenter beneath the Earth’s surface. The shift in both plates creates a series of vibrations that generate seismic waves resulting in an earthquake.

Global statistics on the frequency of earthquakes

Based on estimations by the U.S. Geological Survey (USGS) from observations since 1900 [1], there are an estimated 1,300,000 earthquakes that shock the earth each year, on average, and can be measured using a seismometer. The majority of earthquakes occur at the plate boundaries along the oceanic and continental tectonic plates where countries like Japan, Indonesia, Western USA, and New Zealand, often experience large earthquakes. An earthquake is measured on a Richter magnitude scale. This scale measures the amount of energy expelled by an earthquake and by applying seismology it’s possible to track the number of earthquakes occurring over an annual period (see Table 1).

Application for Seismometers in the study of earthquakes

The science of seismology is based on the idea of using a sensor to detect an earthquake and to measure the magnitude of an earthquake. Seismology also focuses on the effects of an earthquake, for example a tsunami. This sensor is made up of an inertial mass component that is mobile relative to the frame of the sensor held to the frame by a spring. This attachment helps to block out any movements once the motion of the sensor frame stabilizes. The aim is to record the motion of the mass relative to the frame of the sensor. The idea being that any motion from an external source will move this frame. By being able to measure the motion of the base relative to the mass, the whole transition is transformed into an electrical voltage that is then recorded on a magnetic tape. Therefore, by using this sensor, the movement of the ground can be measured (Figure 2).